JadedAid was launched in 2015 by Jessica Heinzelman, Teddy Ruge, and Wayan Vota after realizing that existing power structures and humanitarians’ propensity to take themselves too seriously were inhibiting honest dialogue about our industry that could catalyze transformative change for improved results.

All innovators at heart, we used Kickstarter to fund the development of a scalable crowdsourced development tool – JadedAid: A card game to save humanitarians. This cutting-edge game was created specifically for the development community through a user-centric approach. 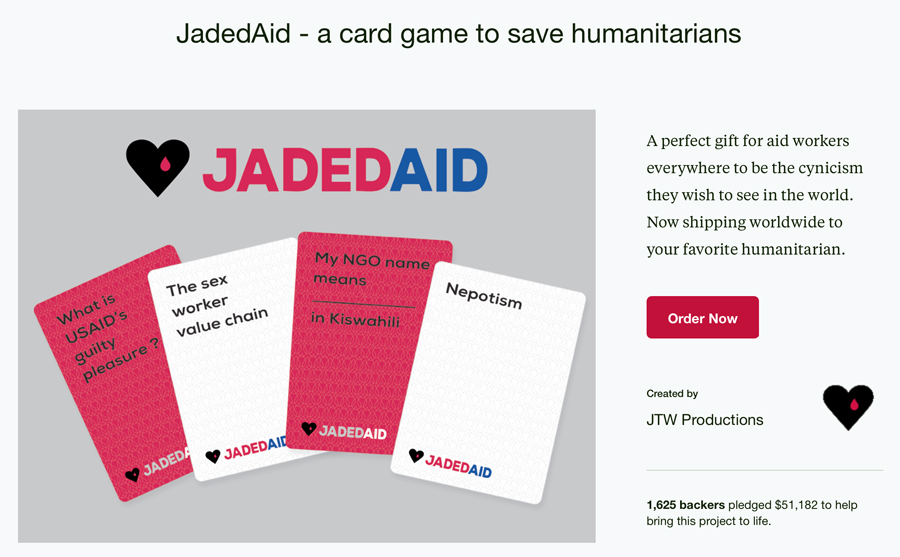 We launched our Kickstarter in September 2015 and raised $51,000 from 1,625 overly trusting individuals in 30 days. With a fundamental belief that we are stronger together, we also crowdsourced the card creation process with the larger development community and with design parties held with contributors from Beirut to Seattle and Dakar to D.C.

Much to our surprise our idea was validated with a flurry of media coverage from reputable outlets such as The Guardian, Foreign Policy, DevEx, HuffPost Live and more. We even had some good feedback from USAID’s Development Innovation Ventures when we applied for funding!

JadedAid incorporates cross-cutting themes ike paternalism, chauvinism, elitism and poop to illuminate the inherent discrimination and dissonance in international development. That’s catnip to traditional media, and we’ve been covered by a wide array of media outlets who want to feature our “Cards Against Humanitarians”

Quartz Africa: Unlike the more generalized cynicism of Cards Against Humanity (CAH), JadedAid’s cynicism is specific—that of the world-weary humanitarian worker trapped in the “development industrial complex,” or “DIC,” as cofounder Teddy Ruge calls it. By that he means the multi-billion dollar aid industry focused on poverty and conflict in developing and crisis-stricken countries.

Could A Vial Of Bono’s Tears End Poverty? In This Card Game, It Can

NPR: With cards like “an unpronounceable acronym,” “a vial of Bono’s tears,” “saving Africa one adoption at a time,” and “giving up any hope of a stable relationship,” the 200-card deck shines a light on aid stereotypes, gets real about living in the field and pokes fun at jargon. And depending on your personal sensitivities, the cards could be offensive or NSFW.

The Guardian: Sounds cathartic but aren’t some of these cards kind of offensive? Exactly. “This isn’t about just dipping one toe across the line of what’s acceptable, the whole point is to take a pole vault and launch yourself across the line,” says Ruge, who on a more serious level hopes the game will encourage more frank discussion about issues in the aid industry. “JadedAid says the things all aid workers have always wanted to say but didn’t have plausible deniability. Now they have it.”

Foreign Policy: Judging from JadedAid’s enthusiastic reception among development practitioners, the game’s criticism has certainly hit a nerve. Beyond the fraught politics of development, many of the cards mock other ever-present industry complaints. Some cards (“What’s the best use for unpaid interns?” or “I can’t believe you just got a Western Union transfer from your mom to pay for ______”) make fun of the low salaries common in the field, particularly for younger workers. Other cards (“a photogenic rape victim,” “holding a child’s unwashed hands”) critique the way aid organizations sometimes exploit images of the people they’re meant to serve for organizational gain.

Jaded Aid: The satirical playing cards with your (organization’s) name all over them

This Take On ‘Cards Against Humanity’ Is Pure Genius

Huffington Post: Some of the cards are really looking at big structural issues — and of course, those are going to be harder to fix. But then there are cards about individual actions — like ‘Helpies: Selfies to brag about helping.’ That’s a card that can change behavior and make people think twice.

WhyDev: Humanitarian and development practitioners have often treated their world weariness with a combination of alcohol, cynicism or despair. Travel on enough missions or work in too many disaster relief contexts, and resisting the Dark Side can be an uphill battle. While advocates such as the likes of Bono and events such as the Global Citizen Festival preach humanity, goals and foreign aid, you’re stuck writing logframes and in uncoordinated cluster meetings, just trying to make it through to R&R.