To the Surprise of Funders, Joseph Mbuntu… 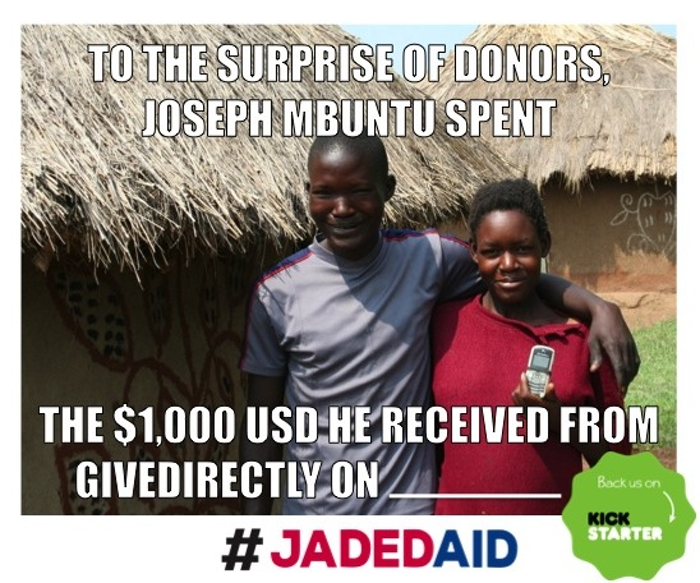 When I was sitting there trying to come up with JadedAid cards, I immediately thought of GiveDirectly. Superficially, it would be a lot of fun to think about what Joseph Mbuntu might buy when handed a wad of cash.  It also has a deeper element that draws out jaded-assumptions about the people we serve and the role of development – a perfect card for the deck!

I had listened to an excellent series of podcasts by Planet Money on the GiveDirectly model, or “what happens when you just give money to the poor.” The podcasts visit Kenya and talks to those that received money to see what they did with it while also asking influential development professionals what they think the money will be spent on.

The development leaders assumed a healthy portion of the money would go to booze and gambling…as did I initially. But interestingly, both qualitative and quantitative evidence showed the majority of people spent the money on items that would contribute to their quality of life and long term economic status. Hmmm… A perfect case of where “expert knowledge” within our field might actually prevent innovation and improved outcomes.

Sure, the GiveDirectly model is no silver bullet. There are a lot of ways in which typical development is still needed and the model would need to be applied smartly to avoid unintentional harm, but I hope you have fun with the card whether with an outrageous pairing or with a deeper discussion about the GiveDirectly model or your own jaded-assumptions about Joseph Mbuntu.

You can listen to the Planet Money podcast here: Part 1, Part 2

Posted in Card Stories and tagged Funding, Theory of Change