What is Post-Brixit DFID’s Secret Weapon Against USAID Dominance? 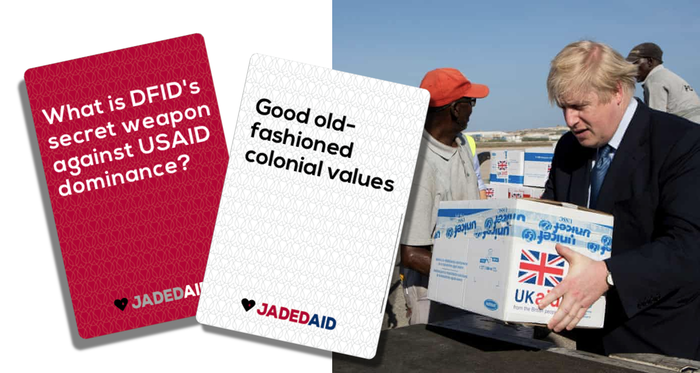 There is no doubt that USAID is the $48 Billion gorilla in the international development space. DFID plays a good game, but at £13 GPB ($18 Billion USD) its a distant second.

DFID still outpaces the $4 Billion annual budget of the Bill and Melinda Gates Foundation and equally sized World Bank, but you know that DFID’s paltry spend and annoying focus on “value for money” causes much anguish at 22 Whitehall.

What is DFID’s Edge Over USAID?

That’s why the JadedAid Question Card, “What is DFID’s Secret Weapon Against USAID Dominance?” is so fun to ask. How can DFID keep ahead of USAID? Especially now that we’re facing a post-Brexit DFID.

There are few answers I like to play in response to this question:

We all need a good laugh now that the only thing between us and a smaller DFID-sized USAID is a few Republican Senators who support foreign assistance, but not impeachment.