Whispering Under Your Breath: USA is Not the Centre of the World 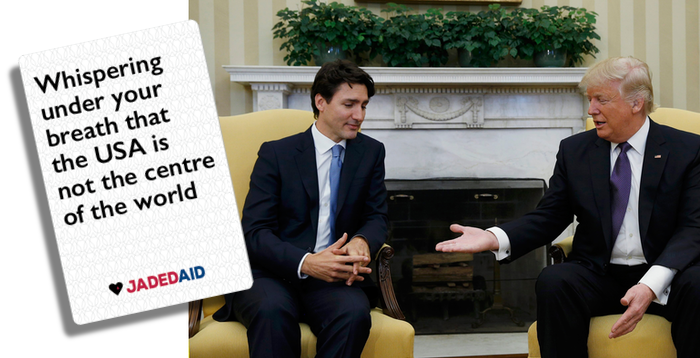 Oh Canada! You are such a marginalized country in the international development area. You need a good JadedAid game to come to terms with your two tiny efforts – IRDC and Global Affairs Canada – that are openly mocked by your much larger southern neighbour.

Global Affairs Canada was previously called CIDA, and was so small that it was often mistaken for SIDA, till it became DFATD, which if pronounced “D-Fat-D” at least sounded like a cool rapper. Sadly, its now rolling with the bland Global Affairs Canada, which sounds like a great code name for an in-kind donation of hookers and coke.

That’s why we love the JadedAid card, “Whispering under your breath that the USA is not the centre of the world,” which was given to us by a proud member of Global Affairs Canada.

Now if Canadians would only love JadedAid…

We still have JadedAid Card Games on Amazon Canada – the only games left on Amazon anywhere in the world, waiting for you to buy them and prove to the world that you do matter.

For everyone else, we have only 20 JadedAid games left for worldwide delivery. Once they’re gone… Well don’t laugh too hard at Canadians, you’ll have to beg them to buy them for you from Amazon Canada.