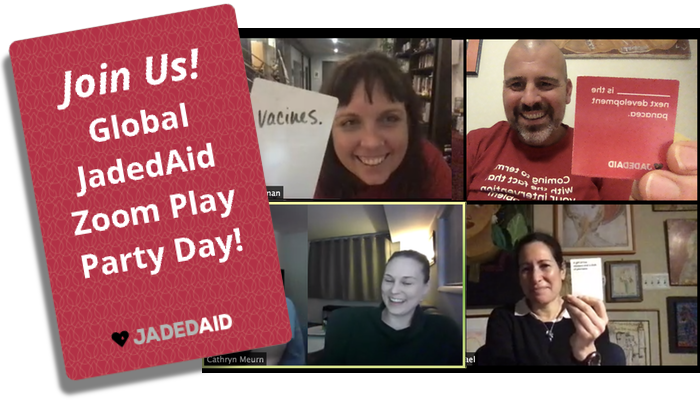 What do you miss most about 2020, as you shelter in place today? Is it the joy of finding the closest workshop venue outside the capital that qualifies for per diems? The sustainable grassroots change that was supposed to come from that damn mural? Or the simpler days of Dennis Rodman Diplomacy?

We bet its the camaraderie of friends who commensurate about dropping their iPhone in a pit latrine. Same for us too! That’s why we’re here to save you from the holiday doldrums with a fun play date.

In the spirit of random days assigned vague significance, we are declaring December 10th to be Global JadedAid Zoom Play Party Day! Celebrate the insanity of international development with your friends, colleagues, and your favorite JadedAid co-founders.

Yes, we’re inviting you to a massively multiplayer online JadedAid Play Party! Don’t worry, everyone will be assigned smaller, more manageable Zoom rooms where you can play JadedAid with your new best friends!

Be sure to sport a cool JadedAid T-shirt!

If you don’t want to mix with strangers, then host your own JadedAid Zoom Play Party. Actually, please host your own. Your friends theories of change are a crock of sh*t!

We’ve developed fun JadedAid Zoom Play Party rules through an extensive multi-stakeholder dialogue with the Humanitarians of Tinder. These Zoom play party rules build on our other JadedAid game rules that you know and love.

Send Us Your New Card Ideas!

We are developing a new 600-card JadedAid card deck for publication in early 2021. We need your help to create new cards that are relevant to development today. As you play JadedAid on December 10th, be sure to write down your brilliant card ideas. Then…

We’ve made up a few new card ideas to get you thinking about how we can bring laughter to underpaid interns next year: